Meeting with Gabriel Christian at his law office 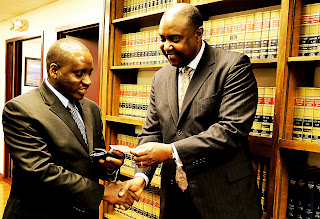 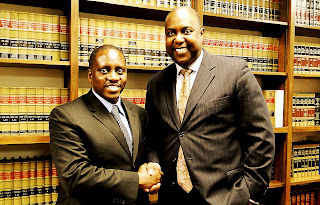 The Childrens book written by Samora and Makonnen Christian, made the news back in 2005.

When Samora and Makonnen Christian set out to write about their summer vacation, their effort went far beyond the typical back-to-school, ‘‘What I did on my summer vacation” essay.
Their book about their visit to Dominica titled ‘‘Our Visit to the Island” was published last summer.
The Upper Marlboro residents got the idea to writing a book for their age group (6 to 12) after visiting their parents’ homeland last year for the first time. 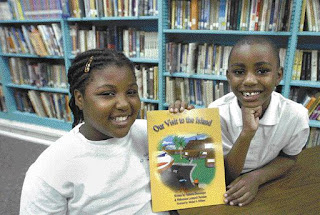 On several occasions, parents Joan and Gabriel Christian had described Dominica to the children prior to their visit.
‘‘It was very beautiful. It was how I pictured it. It inspired me so much that I wanted to write about it so others would know,” said Samora, 9, a fourth-grader at St. Ambrose School in Cheverly.
‘‘Also, I wanted to write it so others could be inspired to write a book themselves.”

Although their parents thought the idea was cute at first, they also said they didn’t want to discourage the children from a worthwhile effort, which turned out to be less difficult than they initially thought.
‘‘As parents, you want to encourage your children. Some are athletic, some are musical. She wanted to write a book, so we did it,” Joan Christian said. ‘‘I feel extremely proud of her and her brother.”
Gabriel Christian immigrated to America 22 years ago; Joan Christian immigrated 12 years ago.
In describing how they divided up the responsibilities, Samora said she made sure the photographs and words matched.
Makonnen, a 6-year-old first-grader at the school, drew some pictures so illustrator Michael A. Williams could have an idea of what Dominica looked like, she said. Makonnen shyly said he did not want to be interviewed.

Samora said she wasn’t intimidated by writing the book because her father is also an author who has written some fiction and about the history before and after the island’s independence at a young age.
Although Samora likes writing, that also proved to be the hardest part of the book because she had to tear herself away from her cartoon shows, one of her favorite pastimes. But she liked working with Williams on the illustrations.
‘‘It was fun doing it, but it was hard because I had to concentrate and focus,” she said of the effort, which lasted about two months.

The book pays special tribute to the Roseau Public Library’s centennial. The authors included it because the library is a central meeting place in the town, Samora said.
The 26-page book, published by Pont Casse Press and the University of Toronto Press, sells for $10 as a paperback and $15 as a hardback. St. Ambrose families can get the hardback for $12.
The book is on sale at Karibu Books and online at www.caribbeansupplies.com. Twenty five hundred copies were printed, and 500 have been sold so far, Joan Christian said.
Samora said she and Makonnen also realize the importance of giving back, so they are donating some of the proceeds to the St. Ambrose library.

Carl Berger said he heard about the book when he arrived at the school as its new principal in August, but didn’t realize it would look so professional.
Berger said he would like the proceeds to be earmarked toward the library’s expansion of books about other countries, which Samora said was cool.
And Samora already is looking to the future, with more ideas for other books in the works, possibly about music.